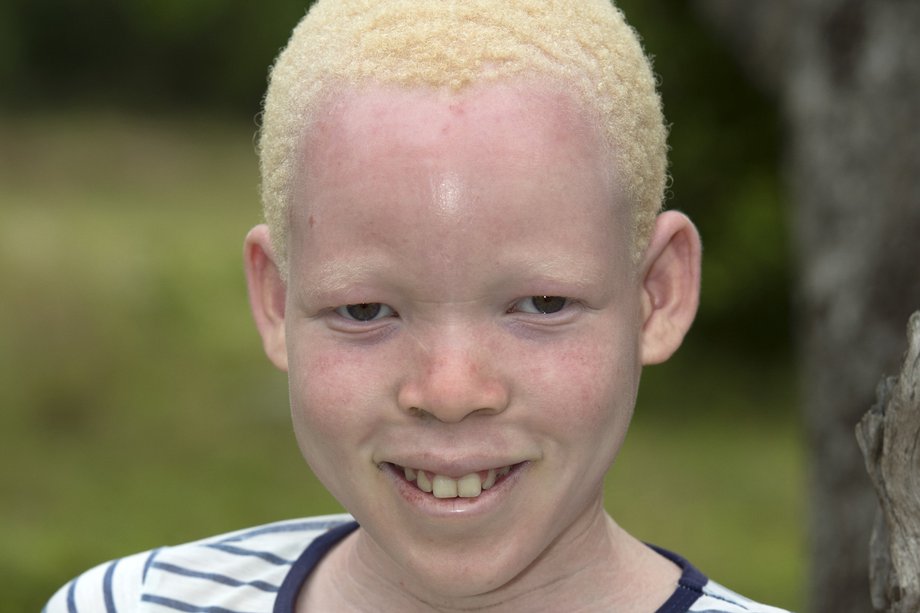 The word “albinism” may make you think of light skin or hair. Albinism is a group of inherited disorders characterised by little or no melanin production. Most people with albinism have pale skin, eye conditions and are sensitive to the sun.

But albinism also can affect a person’s eyes. When it does, it’s called ocular albinism, a rare eye condition that happens much more often in boys and men than in girls or women.

The eyes of someone with ocular albinism may look different and act differently, and the person might need to wear special glasses or contact lenses. But that person won’t lose his vision completely, and it won’t get worse over time. In fact, as children who have it get older, their eyesight may get better.
People may experience;
• Visual: astigmatism, blurred vision, nystagmus, amblyopia or sensitivity to light.
• Eyes: lazy eye, underdeveloped optic nerve or rapid involuntary movement.
• Skin: loss of colour or freckles. Lack of skin pigmentation makes for more susceptibility to sunburn and skin cancers.
In rare cases such as Chediak-Higashi syndrome, albinism may be associated with deficiencies in the transportation of melanin granules. This also affects essential granules present in immune cells leading to increased susceptibility to infection.

Albinism results from inheritance of recessive gene alleles and is known to affect all vertebrates, including humans. It is due to absence or defect of tyrosinase, a copper-containing enzyme involved in the production of melanin. It is the opposite of melanism.

Unlike humans, other animals have multiple pigments and for these, albinism is considered to be a hereditary condition characterised by the absence of melanin in particular, in the eyes, skin, hair, scales, feathers or cuticle.

There are different types of oculocutaneous albinism depending on which gene has undergone mutation. With some there is no pigment at all.

The other end of the spectrum of albinism is “a form of albinism called rufous oculocutaneous albinism, which usually affects dark-skinned people”.

What is ocular albinism?

Ocular albinism is characterized by severely impaired sharpness of vision (visual acuity) and problems with combining vision from both eyes to perceive depth (stereoscopic vision). Other eye abnormalities associated with this condition include rapid, involuntary eye movements (nystagmus);

eyes that do not look in the same direction (strabismus); and increased sensitivity to light (photophobia). Many affected individuals also have abnormalities involving the optic nerves, which carry visual information from the eye to the brain.

OCULAR ALBINISM
Unlike some other forms of albinism, ocular albinism does not significantly affect the colour of the skin and hair. People with this condition may have a somewhat lighter complexion than other members of their family, but these differences are usually minor.

The most common form of this disorder, ocular albinism type 1, affects at least 1 in 60,000 males.

The prevalence of ocular albinism has been reported to be one male in 20,000 births. The classic signs and symptoms of this condition are much less common in females.
Ocular albinism primarily affects pigment production in the eyes.

Several vision problems can occur with ocular albinism including;

• Nystagmus:an involuntary movement of the eyes back and forth.

• Foveal hypoplasia:reduced iris pigment in some individuals reduced retinal pigment, and lack of development of the fovea leading to blurred vision, and abnormal connections in the nerves from the retina to the brain that prevents the eyes from tracking together and reduces depth perception.

Typically individuals have normal hair and skin pigmentation.
The human eye normally produces enough pigment to colour the iris blue, green or brown and lend opacity to the eye. In photographs, those with albinism are more likely to demonstrate “red eye”, due to the red of retina being visible through the iris. Lack of pigment in the eyes also results in problems with vision, both related and unrelated to photosensitivity.
Because individuals with albinism have skin that entirely lacks the dark pigment melanin, which helps protect the skin from the sun’s ultraviolet radiation, their skin can burn more easily from overexposure.
Those with albinism are generally as healthy as the rest of the population, with growth and development occurring as normal, and albinism by itself does not cause mortality, although the lack of pigment blocking ultraviolet radiation increases the risk of melanomas (skin cancers) and other problems.

Genetic testing can confirm albinism and what variety it is, but offers no medical benefits except in the cases of non-OCA disorders that cause albinism along with other medical problems which may be treatable. There is no ‘cure’ for Albinism.

The symptoms of albinism can be assisted by various methods.
The diagnosis of ocular albinism is based on the characteristic eye findings.

Female relatives who carry the gene for ocular albinism will have some retinal pigment abnormalities (seen as mild iris transillumination) but usually will not have the visual changes observed in affected males. Very rarely females can be affected with the hallmarks of OA1 including nystagmus and foveal hypoplasia with reduced visual acuity.

Molecular genetic testing for GPR143 gene detects mutations in approximately 90% of affected males and is available to confirm the diagnosis.

Since there is no cure for albinism, it is managed through lifestyle adjustments. People with albinism need to take care not to sunburn and should have regular healthy skin checks by a dermatologist.
For the most part, treatment of the eye conditions consists of visual rehabilitation. Surgery is possible on the extra-ocular muscles to decrease strabismus. Nystagmus-damping surgery can also be performed, to reduce the “shaking” of the eyes back and forth. The effectiveness of all these procedures varies greatly and depends on individual circumstances.
Glasses, low vision aids, large-print materials, and bright angled reading lights can help individuals with albinism.

Some people with albinism do well using bifocals (with a strong reading lens), prescription reading glasses, hand-held devices such as magnifiers or monoculars or wearable devices like eSight and Brainport.
Albinism is often associated with the absence of an iris in the eye.

Contact lenses may be coloured to block light transmission through the aniridic eye. Some use bioptics, glasses which have small telescopes mounted on, in, or behind their regular lenses, so that they can look through either the regular lens or the telescope. Newer designs of bioptics use smaller light-weight lenses.