World Glaucoma week 2021 : ‘The World is Bright, Save your Sight! 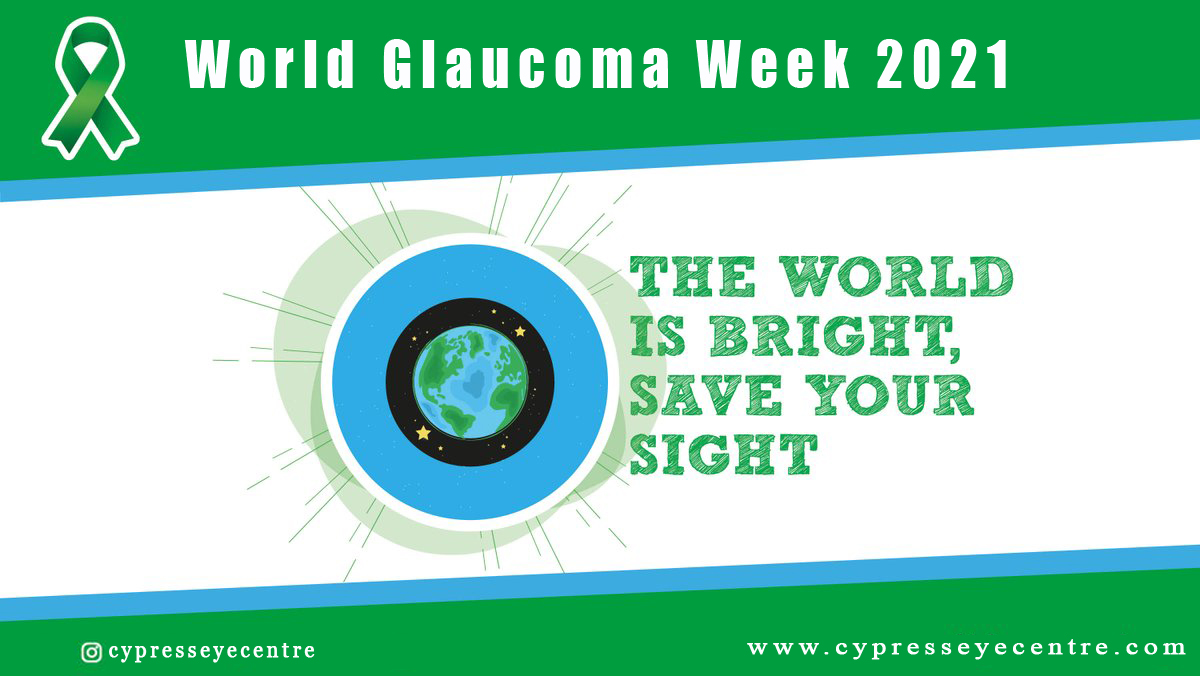 #worldglaucomaweek is a global initiative that was put together by the World Glaucoma Association to raise awareness about glaucoma on a global scale.

and there are really no symptoms to the patient until it is in the very end stages where damage is irreversible.

So, it is such an important initiative to raise awareness so people can get into the eye Doctors, bring their family, friends into the eye doctor, and get checked out. Early intervention is the key to managing glaucoma.

Glaucoma is the name for a group of eye conditions in which the optic nerve is damaged at the point where it leaves the eye to the brain. (This nerve carries information from the light-sensitive layer in your eye, the retina, to the brain where it is perceived as a picture).

Your eye needs a certain amount of pressure to keep the eyeball in shape so that it can work properly. In some people, the damage is caused by raised eye pressure. Others may have eye pressure within normal limits but damage occurs because there is a weakness in the optic nerve. In most cases, both factors are involved but to a varying extent.

Why is increased eye pressure serious?

This is the most common type of glaucoma. It happens gradually, where the eye does not drain fluid as well as it should. As a result, eye pressure builds and starts to damage the optic nerve. This type of glaucoma is painless and causes no vision changes at first.

Some people can have optic nerves that are sensitive to normal eye pressure. This means their risk of getting glaucoma is higher than normal. Regular eye exams are important to find early signs of damage to their optic nerve.

When the drainage angle (through which the fluid in the eye drains) gets completely blocked, eye pressure rises very quickly. This is called an acute attack. It is a true eye emergency, and you should call/visit your doctor right away or you might go blind.

Here are the signs of an acute angle-closure glaucoma attack:

Angle-closure glaucoma can cause blindness if not treated right away.

People with “normal-tension glaucoma” have eye pressure that is within normal ranges but shows signs of glaucoma, such as blind spots in their field of vision and optic nerve damage.

In the early stages of chronic glaucoma, there are frequently no obvious symptoms, and whilst increased pressure in the eye may be an indicator, this will not necessarily mean you have the disease. The most efficient detection method for glaucoma is a regular eye examination. Those most prone to developing glaucoma are people over 60 and people with a family history of the disease although younger people can have glaucoma and some children can be born with glaucoma (congenital glaucoma).

Who is at risk for glaucoma?

Some people have a higher than normal risk of getting glaucoma. This includes people who:

What’s the treatment for glaucoma?

Doctors use a few different types of treatment for glaucoma, including medicines (usually eye drops), laser treatment, and surgery.

If you have glaucoma, it’s important to start treatment (as recommended by your doctor) right away. While it won’t undo any damage to your vision, treatment can stop it from getting worse.